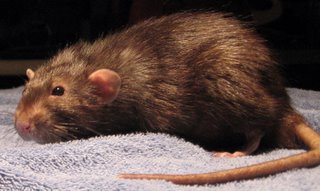 Boober, a name I chose, is a charcoal male rat. Boober was offered by the pet shop as a 'rescued animal' so I was at first relunctant to take him for fear of disease or infestation. But when I met him my mind and heart changed. He was brought out and I could tell he was the right boy rat for my life. I reached over and skritched his cheek and back and then picked him up and placed him on my shoulder. Boober snuggled into my scarf and seemed very content. 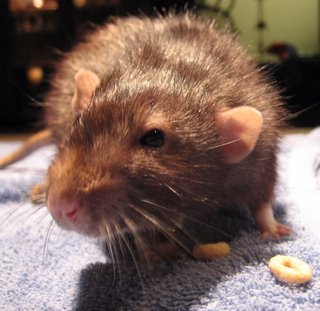 Boober spent the first few minutes at home sitting in his box, pushing his bedding out at us as if to shield himself from our affections. Eventually we just took him out and had him sat in our laps and on our shoulders while we prepared his home. By now the ratty girls began to notice someone new in the house...

I sat Boober in his cage and he at first stayed in the upper level and acted as if he was moping. He would at first refuse any food offered to him by hand but eventually took an offering of yogurt covered cheerio and dried banana chip. I took him out and had him sit with me on the bed with the option to hide under a bath towel. Boober slept off an on while we took turns adoring him.

The ratty girls were fawning and mooning at every chance to look at Boober. They sat on the top shelve of their cage overlooking Boober's cage as they watched Boober making himself at home.

Boober found the bottom level of this cage and hid in his igloo house. He would pull in bedding and I noticed he had started sneaking treats down to his secret cache. This really got the ratty girls excited. I sat across the room and watched as Boober searched and explored his new home, rearranging bedding to his liking and stopping once in a while to look towards the ratty girls.
Posted by christopher at 1:11 AM

Very handsome boy! It's always great when you can rescue a critter. Good for you to provide him with a wonderful home.

I see why the girls are excited, he is a fine-looking boy!

What a cutie ~Poiland Tribe