And then she was gone. 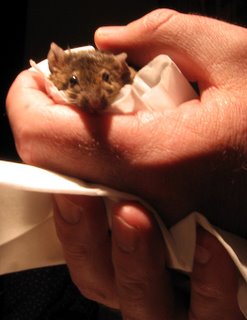 It's Saturday evening and she's near the water bottle, laying on her back and turned slightly to her side on a small mound of bedding.

Her eyes were open and at first appeared bright but after a few moments I knew she was gone. She was slightly warm so she had not been gone long. I took her out and prepared her burial cloth with treats.

After 'Big' Quimby began her journey I went to the cage to clean up the spot where she had her last moments. It was then I noticed the other mice had plugged up one of the tubes leading to their nest, as if they had sealed her away from their sight. I took the two remaining girls out and cuddled with them for a while . When I returned them they immediately ran to where she had been and laid down on the spot, their ears flat and their noses down.
Posted by christopher at 1:21 AM

I'm so sorry. You have had a sad time of it lately. {hugs} to you and the girls.

Why do sad times always come in clusters? I am sorry, my dear. My thoughts are with you.