I attended a local science fiction convention this weekend. I found this little guy in the dealers room (a sort of geek flea market...) I couldn't resist, despite it being a bit pricey. But then, how can you put a price on cuteness?!

I wish a person could get meds without a vet*. I know I'm not as experienced and knowledgeable as a veterinarian, but I also know I wouldn't indiscriminately medicate. I found out there is only one clinic in my region (I live in North Dakota) that has pocket pet experience (I called the local university for a referral); I called the clinic and it would be a minimum of $60 to see the doctor and get a small prescription of Baytril to have on-hand...and that's only if they agree to prescribe it.

This last situation with Lena was highly likely a classic respiratory infection. Time was of the essence to get Baytril into her, to give her a fighting chance. The clinic told me today they don't do emergencies per se, and it would be a minimum of two days to get in. That could be critical time in saving a mouse, in my opinion...

* I used to own horses in the 1970's. Obtaining meds for livestock was easy, from innoculations to antibiotics. When I go online now to find sources for building a basic mouse medicine chest, all the sites make it clear a prescription is required. I assume laws are either different for small animals, or the laws have changed since the 1970's. Either way, it looks like a choice between doing without, or coughing up a significant amount of money for the wee ones.

Posted by Trishymouse at 8:34 PM 2 comments:

This picture, which was the best and clearest picture taken of her, was taken the day she died.

Lena did not stand out from her siblings for the first two weeks of her life until I noticed how small she was in comparison to the other pups. She did seem to have some trouble breathing. I was so afraid she was ill or being brutalized by her larger siblings. Or even worse, she was being ignored by her birth mother, Pudding, and / or her surrogate mother, Belle. But there was no real evidence that she was mistreated, was being ignored, or was ill. She was just a runt. In fact, when I picked her up she would stick her nose up at me and make little chattering, smacking noises while sitting back on her hunches. She was actually quite sociable and appeared to be interacting with the other pups, chasing her "mommies" around the cage and seemed genuinely interested in eating "hard food", like seeds.

I decided to start augmenting her diet with "kitten formula," feeding her three times a day between .5cc and 2.0cc of the formula through a syringe. The first feeding was not very successful. Lena fussed and avoided the tube and made more of a mess than a dinner. The second time I set her up for feeding she was actually waiting for me to pick her up, chattering at me and reaching for my fingers when I leaned in to grab her. This time she took the tube between her front paws and eagerly suckled away on it with me pushing through enough formula to keep up with her demands. After she was done she would sit back, clean herself up, and then go exploring around my hand or up my arms. She would in fact be very excitied to go see the world around her and when I put her back in the cage she would make several laps around the cage, climbing up and over anything in her way, and then go back into the mouse house and snuggle down either by herself or with another mouse. Every feeding was like this, with Lena getting more and more brave and interested with the world around her.

The evening came on the last day, just three days short of her fourth week. Early that day I took the picture seen above after a rather successful feeding. Lena was full of living that day. I put her back in the cage for the day. Later when it came time for feeding all the beasts I could see her prancing around the cage, eager as usual, and even stopping to press up against the glass of the cage and seeming to look up at me. I took her out for a while, played with her and chattered with her before putting her back in the cage. This was also the night we separated the other male and female pups that were healthy and weaned from their mother and put them into separate cages. I had planned on taking a quick shower after feeding all the other beasts and then spend time with Lena's feeding before going to work. I came out of the shower, got her formula prepped and went to get Lena. I found her in the mouse house, apparently sleeping or resting and covered with some bedding as if she were cold. I first thought she may have been tired from nursing, but she was lethargic and limp. I could see that her eyes were open and that she was breathing, but her breathing pattern had changed. I picked her up, hoping she would perk up and take interest in the feeding but she would not do more than move her head slightly. I cried to Trish that there was something wrong. I looked Lena over, trying to find anything obviously wrong with her. I gently put Lena back in the mouse house, watched her for any activity and got ready to go to work. I could see that she moved herself a couple of times while I waiting to go. I went to work, fighting back sobbing or openly crying. After being at work for about a hour Trish called and said she would check on Lena. Trish said she could see that Pudding and / or Belle had been busy, covering Lena with bedding, and even appeared to be trying to block Trish from getting to Lena. Trish took Lena out, told me over the phone that Lena was cold and stiff, her eyes closed, and not responsive. Trish and I discussed what we should do with Lena, what would be a fitting way to let her go. 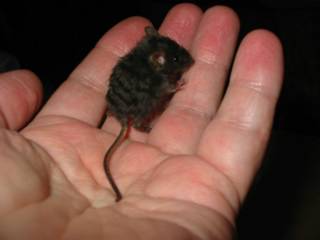 It's hard to believe that Lena is gone. Just 3 hours ago, she was lively and walking all over Christopher's hand and up his arm. He delighted in her. I in turn delighted in my heart with him. It crushes a person's heart every time this happens. There is something so sweet and pure about the little creatures among us such as Lena was. So small, so short a life, it was all she knew. We tried to give her comfort.

At times like this, it makes me wonder, why can't we look at fellow human beings with as much compassion? I love animals very much, but it's harder with people. It's rather sad and damning all at once. 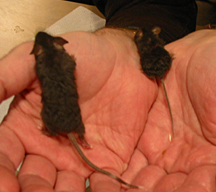 Lena is one of the eight pups born to Puddin' three weeks ago this past Saturday. In a few days, she will be four weeks old.

She is the one on the right in the picture above. For comparison's sake, when we took the photo this morning, we had her sister with her. As you can see, there is a very noticable difference in size. It only became apparent in the last 10 days. Before that, all the pups were growing at same rate.

From what we can tell, she is not ill, nor is she being ignored. We observe her nursing, she has started to nibble on adult food like her siblings, she explores the cage, snuggles with her Mom and siblings, etc. We began trying to supplement her with kitten formula using a feeding syringe, and she seems to enjoy the experience - both the extra little bits of food, as well as the attention. Her eyes are bright, and she seems happy. Just very small.

We're not sure why. Is she a runt? Or is there a small mouse strain/trait coming out in her? We're new to all of this. We've become rather fond of Lena, and hope all fares well...