Rat Thing to Do Chaucer's breeder recently demonstrated how rats are friendly and loving companions at a University of Minnesota Bell Museum event. COOL!
Posted by Trishymouse at 1:59 PM 3 comments:

Isis had her babies last night. We're not sure what was wrong, but they were small and weak, and some stillborn. Only four pups. One lived awhile, and we put it on a warm pad, gently rubbed/stimulated it, and tried to give it little drops of Pediasure. Isis wouldn't take care of it. She wasn't ready to nurse anyways, which is probably the reason. I think she dropped them too soon. It was so sad. We will try to breed her and Chaucer again after she recovers. I hope it was just an anomoly, and not a genetic predisposition. Here's hoping, because they would be such wonderful to breed together.

I shall always remember the one who struggled to live - he had such cute, tiny whiskers...
Posted by Trishymouse at 11:42 AM 2 comments: 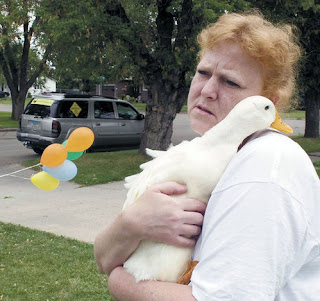 BARNESVILLE, Minn. – Winnie and Babbles are stirring up a political earth-quack here.

Opinions shake out like this:
Some see the 1-year-old ducks as harmless family pets who should be allowed to nest in Barnesville.
Others believe changing the city’s pet ordinance to allow ducks will open the door to potential problems.
“The next thing might be crocodiles,” said one woman who refused to give her name, a common response when people were asked about the pet issue Thursday.
Some aren’t happy about the attention Barnesville is getting over the debate.
“We kind of like our quiet town just to be quiet,” said Ivy Olson, who suggested that the ducks’ owners might have reviewed local ordinances before moving to Barnesville.
“They just moved to town. They are renting a house, so they aren’t residents here, and then they come in and they’re trying to change our laws?
“I don’t think that’s quite right,” said Olson, a lifelong resident of Barnesville.
The flap started in the spring after an animal control officer spotted Winnie and Babbles shortly after the ducks and their owners, Eric and Jeana Lanum, moved to Barnesville from Fargo.
Since then, the Lanums have pushed for a revamping of the city’s rules, which allow only dogs, cats, gerbils, hamsters and caged birds as permissible household pets.
The City Council voted 5-1 in June against changing the law.
Officials told the family they wouldn’t consider a modification unless it’s shown that the public wants the change, Jeana Lanum said.
To that end, the Lanums have been gathering petition signatures, including about 15 secured during an all-day save-the-ducks rally Thursday at the couple’s home.
In total, about 150 Barnesville residents have signed petitions favoring an ordinance change, Jeana Lanum said, adding that they hope to get many more signatures before presenting the documents to city officials.
The family was given a deadline of Aug. 8 to get rid of the ducks.
The council’s next scheduled meeting is Aug. 13.
Jeana Lanum said they plan to call city officials Monday to ask that a special council meeting be held before Aug. 8.
Lanum said she isn’t sure what will happen if the deadline arrives before the issue is resolved.
She isn’t aware of any penalties for violating the ordinance.
“We can’t let them go, and we won’t,” Lanum said of the birds, which the Lanums and their children, ages 9 and 4, raised from ducklings.
Barnesville Mayor Ken Bauer said a special meeting won’t be necessary because he’s told the police chief to refrain from taking any action for now.
Bauer said it’s unclear just what steps could be taken if the ordinance is not followed, adding that the city has turned to a law firm to try to answer that question.
Bauer said City Council members do a good job of representing their wards and if strong support for an ordinance change exists, “it will be addressed,” he said.
Bauer said he has told the Lanums he would put the issue back on the agenda if they can get support from 35 households from each of the city’s three wards, which he said would represent roughly 10 percent of the town’s households.
Bauer said he is aware of another group of petitions being circulated that call for the ordinance to remain the way it is.
Bauer said 60 percent to 70 percent of the e-mails he has received on the issue back a change in the law. Most have come from people who don’t live in Barnesville, he said.
Bauer, who has a vote on the council only when there’s a tie, said the reason for a pet ordinance is to give the city a measure of control over what kind of animals may or may not be kept in town. He said ducks are not at the top of his list of worries.
Jeana Lanum said based on her contacts with residents, roughly 140 households have animals that violate the city pet ordinance.
“Ferrets, guinea pigs, snakes, iguanas – pretty much any pet you can go and buy at a pet store,” she said.
Posted by christopher at 10:08 AM 1 comment:

Right pet for the job 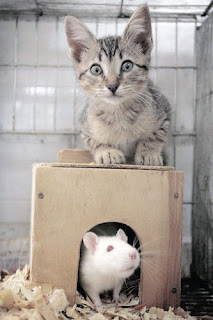 Right pet for the job

BOGOTA, Colombia – For the past year, a special Colombian police unit has been locking rats in cages with cats as part of a project to train the rodents to sniff out the more than 100,000 land mines planted across this conflict-wracked country.

Bringing the rats face to face with an enemy allows them to stay more focused once they are released. The rodents are taught to freeze in front of mines, but had difficulty staying put for fear of being attacked by predators.

“Here the cats play with the rats instead of attacking them,” veterinarian Luisa Mendez said. “The cats wear shields on their nails so they can’t cause any injuries and as a result the rats feel comfortable playing around them.”

The rats’ success rate in mine detection is 96 percent. Unlike dogs, the rats weigh a lot less and therefore don’t trigger explosions.

Colombia is home to the world’s largest number of land mine victims. Last year, there were 1,108 victims, or about one every eight hours, the government says. Nearly a quarter of the victims die from their injuries.

Posted by christopher at 12:41 PM No comments: 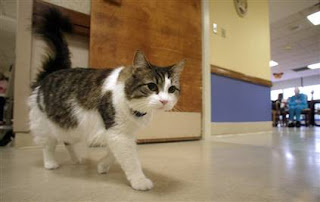 Oscar has predicted 25 deaths by curling up next to patients in their final hours
Posted by christopher at 5:08 PM No comments:

We've been trying for over 6 weeks now to get rat babies. I've witnessed many matings, seen the signs of the doe in heat, had the pair living together for weeks, etc. but...no babies. Why is it when you don't want babies they happen, and when you do, they don't?! If anyone has tips, please let me know. These two are not getting any younger! They come from the same line, are cousins, and long-lived, so a great pairing if we can be successful...
Posted by Trishymouse at 2:32 PM 2 comments:

Eulogy for a Friend 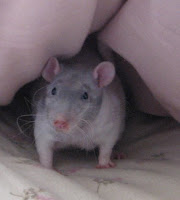 I know I say it every time we lose a furry friend, but it's true: "He was special."

Slugo was an amazing person. He may have only been 18" long nose to tip of tail, walked on all fours, and have very wiry, curly whiskers, but to me, he was my friend.

We saw him in a small cage at a local pet store, all bubbly and wanting attention. Christopher noticed him first, and we left thinking we can't take another one. But his little face kept popping into our minds all that night, and the next day, we went to get him. Best decision we ever made.

Slugo was one of the happiest, friendliest little guys you could ask for. He wasn't very healthly from the get-go, and we had to take him to see the doctor more often than most, but he was worth every penny. He brought joy into our lives, and we hope we did the same for him. I will always remember the cuddles, the wrestling matches between him and my hand, seeing his little butt running down the back of the couch, and of the many times I passed his home and saw him sleeping contentedly in his little cube hammy.

While the talk may have appeared one-way on my part, there was plenty of communication coming the other way - Slugo's expressive eyes conveyed not only an intelligence, but a sense of humor and mischievousness. Yes, Slugo knew how to enjoy life, and that's pretty important when you live only two years if you're lucky...and he wasn't. We're not sure how old he was, but he was still growing up when he came to live with us last year. At the most, he was a year and a half.

With love comes risk, and always, always pain. Some say it's not worth it, but I disagree. It most definitely is worth it. Slugo, I love you, and if there is more after death, I hope you are at peace...and happy.
Posted by Trishymouse at 2:16 PM 3 comments:

Slugo rat has be struggling with illness from the day we first got him. This time Slugo was getting lethargic and having problems with passing urine and stool. Supplementing Slugo's diet with Pedialite, Pediasure and yogurt appeared to help him recover somewhat and with this last round of illness it appeared he was making a comeback. Slugo was having that rally of youthfulness that most if not all have when nearing the end.

Late night when we looked in on Slugo rat we found he was cold and barely responsive. I carefully picked Slugo up and he turned his head as if he was looking up to me. I sat down with Slugo rat on a blanket, he sitting in my hand. Slugo rat would make infrequent, quiet little whimpers, his body twitching with each cry. Slugo rat's front feet were pressed against my finger, his toes grasping onto for comfort. A couple of times Slugo rat reacted like he was startled or afraid and tried to move but would settle back into my hand. I quietly whispered to Slugo rat and gently scritched and tufted him, hoping to give comfort in these final moments.

I gently placed my fingertip against his ribs on the left side and I could feel his heartbeat slowing down and becoming more irregular. As he left, his body made subtle little twitches, almost as if he were still breathing. It took several minutes for me to accept that he was gone and I cuddled him, stroking his sweet little face and whispering "it's o.k." and "I love you."
Posted by christopher at 2:57 AM 2 comments: 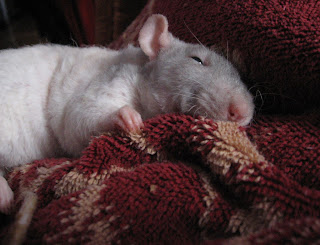 There is a disturbance in The Force...
Posted by christopher at 3:29 PM No comments:

Some time ago, I told you about Mouse Guard, an ongoing epic tale told in the comic arts tradition.

Now comes The Mice Templar, another mouse epic (can there be too many?!) And yes, each creator knows about the other, and is very supportive, which is neat in this cutthroat world of ours.

Go here to read a sample story...
Posted by Trishymouse at 7:11 PM 1 comment: