Momma Isis rat let us peek on on her babies this morning. There is one with dark fuzzy fur and another with grey fuzzy fur. The darker colored baby was actively snuggling with the lighter sibling. I'm still sad that Momma Isis rat lost two (or more) babies since birthing but such things are not as easy to predict or avoid. Momma Isis rat greets us with bruxes and snuggles and demands for treats and appears to be in good health. We'll start handling the babies as Isis rat allows us.
Posted by christopher at 4:00 PM No comments: 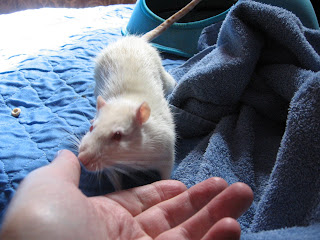 Young Spidey rat has grown up into quite the fine gentleman rat. 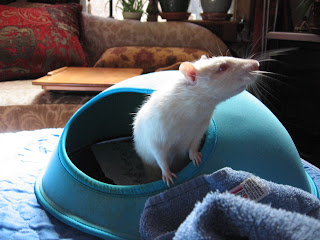 Spidey rat enjoys his playtime and is good cuddle buddy.
Posted by christopher at 12:20 PM 2 comments:

Momma Isis rat let me in this morning. In fact she was ready and waiting for me and desperately wanting to come out for play and snuggle time. As she climbed onto my shoulder I was able to reach in and find three babies. Each time I picked on up Isis would calmly take the baby out of my hand and put it back. Otherwise Isis was not too upset. As Isis and I continued our inspections and while she was distracted I put in some fresh bedding to mix in with the soiled bedding. Isis allowed me to hold all three babies together for a short time: they are small but appear to be healthy and well fed. Each baby responded to my light touch with a wiggle and a small squeak. Momma Isis rat let me know it was time to put everyone back proceeded to rearrange her nesting materials.

Meanwhile, Amelia rat, who had some sort of respiratory issued and was separated from Isis rat during the last week of Isis's pregnancy, was taken out of her temporary cage and put back into the big, fun cage. Amelia rat literally lit up with glee when she realized she was going back home to her wheel, hammocks and multiple levels of running around space. Amelia rat inspected her old home and then had some quality time on her wheel before choosing which hammock to nap in.
Posted by christopher at 12:30 PM 3 comments:

Momma Isis rat has let me check in on her and the babies one time before letting me know I had to go away (the last time I checked her she gently nipped at me and pushed my hand away.) I found momma and babies under the bedding, not long after the birthing, and Isis was busy cleaning and moving them. Isis let me rearrange the bedding and do an initial count. Isis has moved the babies a couple of times and appears to have accepted them. I'll leave her and the babies alone for awhile before checking in on them later tonight.
Posted by christopher at 3:49 PM 5 comments: 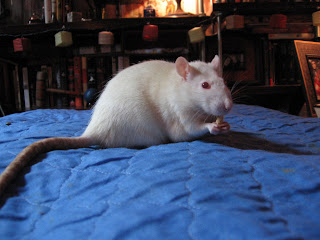 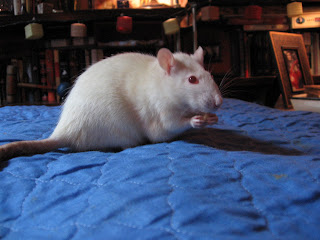 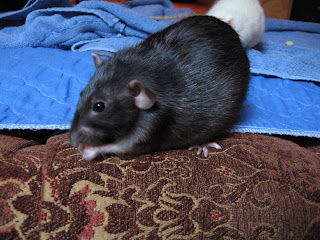 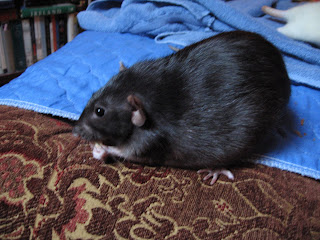 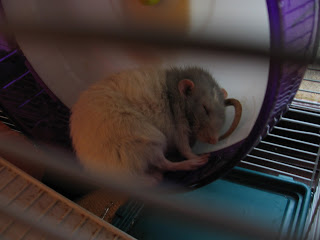 Chaucer rat would rather sleep.
Posted by christopher at 6:38 PM 2 comments:

We've been a bit busy, sorry. One of the things we've been busy with is...matchmaking.

Yes, once again we are trying to bring forth little Chaucers and little Isis's. It is official 'Isis Watch' time around the Wee Little Beasties house. Today is her due date! So far, no news. We'll keep you posted...
Posted by Trishymouse at 7:23 PM 3 comments:

First a threat, then an eviction: Pet ducks to go

First a threat, then an eviction: Pet ducks to go
09/06/2007
BARNESVILLE, Minn. – Jeana and Eric Lanum have until Monday to remove a pair of Pekin ducks from their property or they will be in violation of the city’s pet ordinance, city officials determined Wednesday.
The Lanums, who moved to Barnesville from Fargo earlier this year, want the City Council to revise the ordinance so ducks Winnie and Babbles can stay. Their latest effort – filing a petition last month asking for changes to the ordinance – failed Wednesday.
During a special meeting, Mayor Ken Bauer asked the six City Council members if they wanted to revisit the pet ordinance.
The Lanums’ petition and a counter-petition filed by two city residents on Aug. 13 contained enough valid signatures to reconsider the ordinance, Bauer said.
“I’m going to proceed to entertain a motion to re-examine our animal ordinance as it now stands,” he said.
The council remained silent.
Councilman Kim Simonsen broke the silence by asking for discussion on the motion, but Bauer declined. “I think everything that’s been said has been said,” Bauer said of the pet ordinance.
The council voted 5-1 in June against changing the pet ordinance that only allows dogs, cats, gerbils, hamsters and caged birds.
Residents opposed to changing the ordinance are concerned about disease being spread by the ducks and that other people will ask for exceptions for other animals not included in the ordinance.
Bauer repeated his request for a motion two more times. Council members were silent both times.
Bauer then ruled that the Lanums’ petition was denied for a lack of motion. “It is now in the Police Department’s hands to enforce our animal ordinance.”
“Obviously this is disappointing,” Eric Lanum said after leaving City Hall. “We don’t know what our next move is.”
In a related development, the Lanums and their ducks faced threats in an incident Saturday.
Barnesville police and Clay County sheriff’s deputies responded to the Lanums’ neighborhood around 12:20 a.m. after a man approached the Lanum residence and threatened the ducks.
Robert Jerome Hilgers, 38, was arrested when police determined he was drinking and driving at the time of the incident, court papers say. His blood-alcohol content was reported to be 0.21 percent.
He drove up to the house with the headlights off and said, “I’m going to shoot those (expletive) ducks,” Jeana Lanum said of Hilgers. She also said someone let the air out of her vehicle’s tires.
Hilgers was charged with two counts of DWI and one count of disorderly conduct after being arrested, court papers say.
“It’s been five months of pure hell,” Jeana Lanum said after Wednesday’s meeting. Three weeks after moving to Barnesville, city officials notified the Lanums that they were violating the ordinance.
At the time, Bauer asked law enforcement to hold off on any action against the Lanums until the ordinance issue was resolved.
Police Chief Dean Ernst gave the Lanums until Monday to get rid of the ducks or face a misdemeanor charge for violating the ordinance.
The Lanums said they would be moving from Barnesville, but did not say where they would go.
Posted by christopher at 1:13 AM 1 comment: