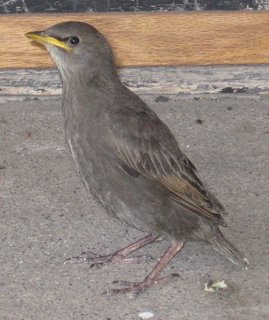 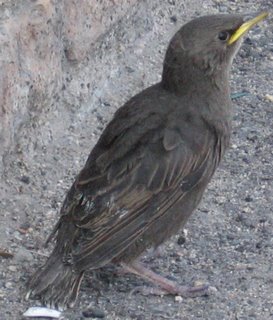 A visitor in the back alley. I have no real idea what kind of bird this is. While taking pictures and chatting the visitor starting squawking back at me and somewhere nearby there was a squawk in reply.
The poor thing seemed lost, perhaps ill. But such is the life of inner-city weelittlebeasties.
Posted by christopher at 4:02 PM 2 comments: 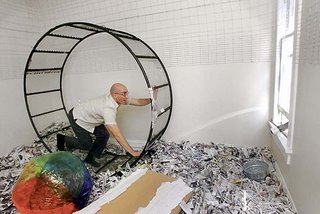 Prankster put in place
OLYMPIA, Wash. – A practical joker got a taste of revenge when friends turned part of his apartment into a human-sized hamster cage, complete with shredded newspaper bedding, a 6-foot exercise wheel and a giant water bottle.
“It was a lot of work, but it was one of those cases where you do it because you have to,” said Keith Jewell, a longtime friend and neighbor who engineered the prank on Luke Trerice.
In 2004, Trerice, 28, enlisted others to help him encase another friend’s apartment in aluminum foil, as well as most of his belongings, including each coin in his spare change.
Eight people put in more than 100 hours assembling the room, and supplies cost about $300.
Trerice said he’s going to start saving now for his own revenge plans.
Posted by christopher at 4:06 PM 4 comments:

Getting all the girly rats together, Eva, Regina and Beatrice, has become very enjoyable. They are not boxing or raging into furballs like they did the first time they were brought together. In fact I have caught them snuggling and mutually grooming each other with seeming to be playing domination power games. Eva will even break from the love fest and come and check me out when they others are busy.
Posted by christopher at 10:27 PM 6 comments: 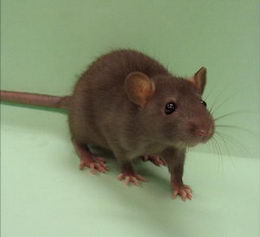 Scientists Reveal How Signals Travel Through Rats' Whiskers
Like blind peoples’ fingers, rats use their whiskers to engage in active sensing – a combination of movement and touch – when trying to figure out the location and identity of a certain object. But how the brain decodes the signals it receives from the whiskers is unclear.
Posted by christopher at 10:43 AM 2 comments: 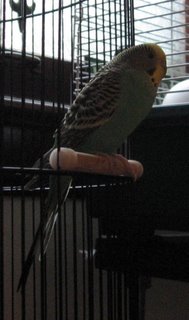 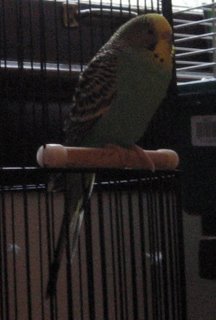 Noble Agatha Budgie Bird stands watch on her door perch, waiting for any chance to taunt an unsuspecting rodent...
Posted by christopher at 7:57 PM No comments:

Over the last couple of days we noticed Boober was not quite Boober-like. He appeared to be lethargic, appeared to not be eating or drinking as much as a Boober should and he appeared sad... Boober had been sleeping a lot, staying in his hammock and dropping his raisins off over the edge of the hammock. I picked him up and it seemed like his heart was just pounding away and when I listened closely Boober sounded like he had some sort of congestive issues. Fearing the worst, CHF, we made an appointment with the veterinarian that specialized in exotic pets like rodents but would not be able to get him in until the next day. We spent that evening cuddling with Boober as much as we could. I have never seen him brux and boggle as much as he did when I had him in my lap while he drifted in and out of sleep... I rearranged his cage to make it easier for him to access his water and food.

The morning came and I got ready to take Boober in the the doctor only to find him animated, bouncing around like Boober does as he eagerly greeted me and morning treats. Boober took each offering and ran, hiding them in his cache in the lower section of has cage and running back up to me to get more. He flirted and played coy, acting like he wanted me to pick him up and then running back into the corner. When I held him his breathing and heart seemed just fine and he bruxed and boggled and was a snuggler, as a Boober should be. Boober has never liked car rides so when we readied him for the trip to the doctor we gave him a towel to hid in. We arrived and waited for the doctor. Boober, still displeased with the car ride, curled up and napped. His turn came and he impressed the doctor and technician in how calm and friendly he was. In fact Boober boggled and bruxed during his examination and squirmed very little during the more intrusive probing. The doctor could not find any real cause for alarm other than maybe Boober might have been stressed or distressed with changes I had made earlier last week with his cage or maybe he needed adjustments with his diet. Boober did ave some minor film build up his right eye that could suggest a scratch but there was no sign of infection or further injury. So, with no real need to be afraid of losing Boober he was sent home with suggestions and notes for observation.

I noticed earlier last week that when I added a portion of a sisal mat to one of his ramps to help maintain his toe nails Boober did not like it. This ramp lead up to Boober's primary food and water area. So, maybe, this is what might have attributed to his malaise. Boober might have also been acting out against my giving more attention to poor old mouses Clara and Curly or Eva Rat. Who knows. We will keep an eye on him and play with him as much if nor more than we have in the past.
Posted by christopher at 3:47 PM No comments:

With regrets I took apart the external tube system attached to Curly's cage. Even though she gets around in them well enough and loves sleeping up in the small petting zone, I notices she is having more and more difficulty getting around in general with the advanced growth of the tumor. Curly was not very happy. I suspect if I could translate she was uttering all sorts of angry chatter-speak while trying to find her way into the tubes that were no longer there. Curly did find some solace in tunneling and burrowing into the bedding that is in the main section of her cage.
Posted by christopher at 7:19 PM 2 comments: 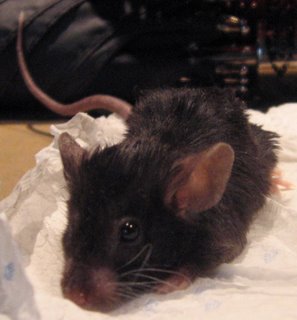 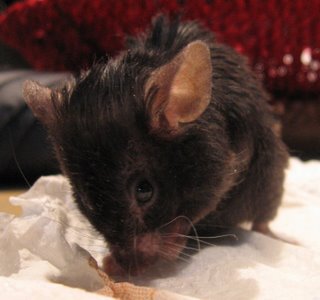 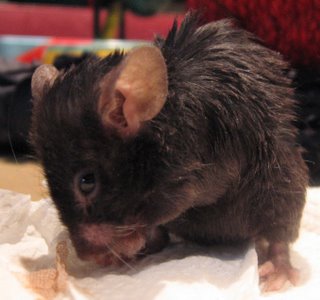 "You looking at me?"

Clara sits up and cleans herself. A much, much different Clara than how she was over the last week. She is still one little old lady. Her eyes are once again bright and she wants to explore. When we were done with our picture taking I put Clara back in her cage and moments latter found her sitting on the edge of her food dish, chomping away at bits of yoggies and dried bananas.
Posted by christopher at 1:04 PM 4 comments:

Eva seem to be adjusting to us but I suspect there are time that she looks at me and knows that I am not her "mommy" and that she misses her. Over time Eva has started to flirt with me more for socializing than for food. Otherwise her only negative behaviors is the rare "is that food?" finger biting and nervous peeing on one of her platforms. I also suspect that Agatha the budgie bird might be intentional intimidating her with wing flapping and squawking at her when and if Eva does something that displeases her.
Posted by christopher at 3:21 PM 2 comments:

Boober's cage is between the girl rats Beatrice and Regina's cage and Eva the rat's cage. I think he is quite aware of his situation and alternates the location of his naps from one side of his cage to the other, depended on which of the female rats is out and about and checking him out. Boober is using his hammock more often and because of it's strategic view he changes the direct he is facing in it to look upon the girls.
Posted by christopher at 3:17 PM No comments:

Curly often meets me at her door with eyes wide and bright, ears perked forward and a soft demanding chitter-chatter for cheerio treats. Her tumor does not slow her down. There are the options for palliative treatments but I am not certain if they are the best thing for her.
Posted by christopher at 3:12 PM No comments:

...and what about Clara?

This morning (Saturday) while I was attending to her, Clara had respiratory distress and convulsions. She would dramatically gasp while her whole body writhed. As I held her I was certain that it was the end... But she recovered and has had no further attacks. For awhile she laid in my hand and panted and then returned to 'normal.' Throughout the day I checked her and spent time with her. Her eyes are getting mucked up and there is some discharge. Part of her routine now, as it was when she first had her incident, is cleaning her with cotton balls, drying her off and dabbing her eyes gently to remove any debris. Clara has taken some of the water offered to her on the q-tip and has nibbled at bits of food. She is peeing and pooping and does react if she notices us looking in on her.
Posted by christopher at 1:40 AM No comments:

I held Clara several times this evening. I've noticed over the last couple of days that she has been slowing down and she is starting to lean to one side again like she did when she had her incident. Clara eats but does not seem to be as enthusiastic about it and I have not noticed if she has been drinking as much as she had been drinking previous to the last few days. When I offered Clara water on a q-tip she pushed it away. Clara's breathing does not appear to be labored. Nor does she appear to be cold. Clara does still get fussy and chatters at me if I annoy her too much with poking and prodding. During the time I held her she would fuss for a few moments and then curl up and sleep.
Posted by christopher at 12:54 AM 3 comments:

We try to get the girly rats all together so they can get to know each other. Last night, after the initial sniff-and-lick, it appeared that Eva tried to establish herself as the Alpha rat over Regina and Beatrice. Regina at first appeared to tolerate Eva's forced grooming and would submit. But when Eva became more aggressive Regina immediately reacted defensively. Beatrice, however, decided there would be none of that and immediately informed Eva that she was not one to be submissive. Eventually I had to marshall them to make sure no one got bit or scratched and tried to distract them with treats before putting them back in their respective cages.

We noticed some very particular behaviors when they were interacting, including: tail writhing (Regina); piloerection (Beatrice); mounting (Eva mounting Beatrice); and - at which time we separated them - 'fight ball' (all three of them)...

Boxing between Eva and Regina was also observed.
Posted by christopher at 10:32 AM 2 comments:

The old mousey girls hanging out together while their cages are getting cleaned. Even though they are kept apart they did not seem too interested in each other except for the initial sniff-and-lick. 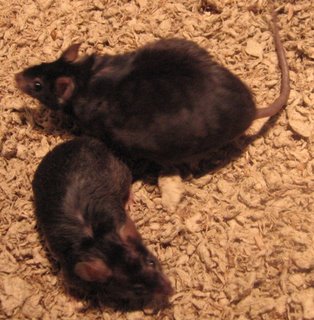 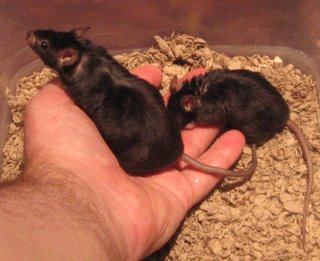 "So, where are the treats?" 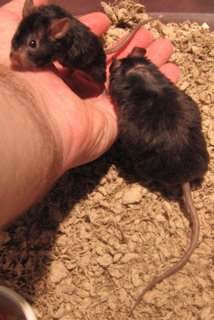 "Are you sure there are no treats?"

"I better check for treats..." 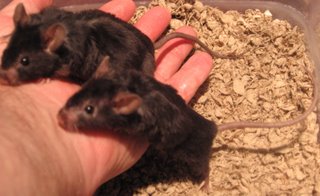 "We are not convinced that there are no treats..." 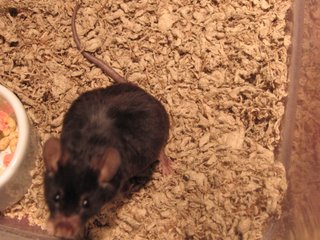 "It's hard being a little old lady." 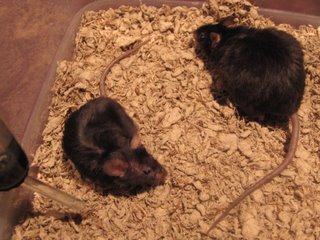 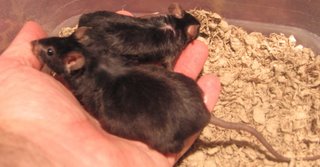 Curly is still the little wiggle. The tumor is not slowing her down at all. I have been giving her more snuggle time than usual in the hope that it help her. 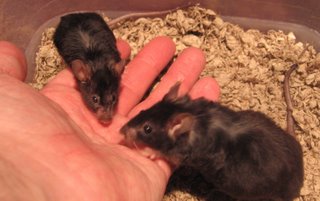 "Maybe the treats will magically appear?" 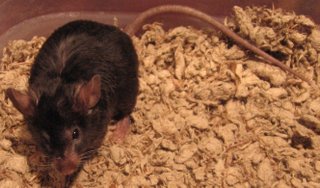 Clara looks very good compared to how she was a month ago. An amazing recovery.
Posted by christopher at 10:52 AM 2 comments: