Of Bird and Rodent

Before the cat's arrival arrangements were made for rodent and bird security. Right away one of the cats, the "little" cat Tigger, took notice of Agatha budgie bird and intended on introducing himself, but, Agatha would have none of that and proceeded to voice her protests to the event. Agatha and Tigger exchanged chirps and soft meows for a sort time and when Tigger was told "NO," he stopped approaching the birdcage. Tigger would also get down off off the counter tops or out of general mischief if addressed with a firm "NO."

The rats seemed to notice the arrival without actually seeing the cats and moved themselves to the farthest back corner of their habitat. Lady mouse appears not too be so concerned. When the "little" cat Tigger approached the boy rats door he was met immediately by the oldest boy rat Barnabas, who stood his ground and gave Tigger the classic 1000 yard stare. Barnabas's fur was slightly raised, and, when I tried to calm him, Barnabas acted suspicious of me until I paid him the proper compliments and made the proper offering of treats. Once again when Tigger was given a firm "NO," and a slight tap on the backside, he backed away from the cage and sat back to watch "Rodent TV" from a distance. Tigger tried to look in on the girl rats, but, appeared by then to be getting the idea to stay away.

A layer of "hardware cloth" was added to strategic points of the rodent's habitat. As well, there are links of metal shower curtain rings at various points to serve as "alarm bells" if a cat tried poking around unwatched. Lady mouse's habitat has been attached to the larger rat habitat so that it could not be knocked over or dragged away. And for her safety, Agatha budgie bird will have to have her free roaming restricted while to cats are out. Agatha budgie bird has a sturdy cage with plenty of space between her and the cats.

The cats will be supervised when out in the general area with the bird and rodents. When the cats can not be supervised they will be put into a spacious room with good light and ventilation. This is also the room where their food, water, litter and bed is kept.
Posted by christopher at 1:17 PM 1 comment:

Not quite four hours and they are starting to feel at home. 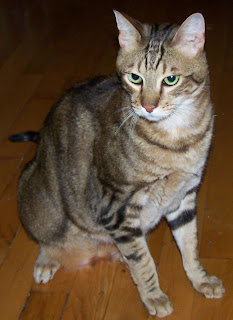 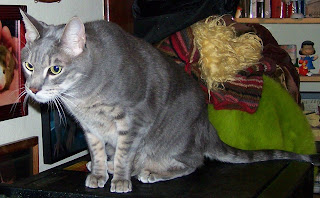 Posted by christopher at 8:08 PM 3 comments:

A conspiracy of rats 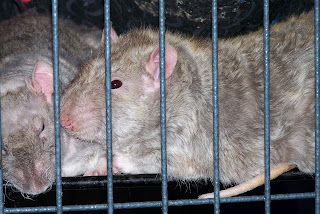 "You distracts them while I gets yogies..."
Posted by christopher at 4:10 PM 1 comment: 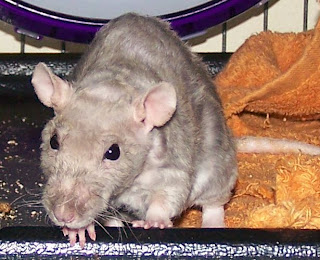 Winnie rat gives me a look... 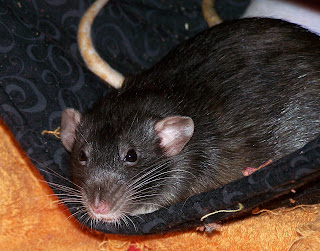 Isis rat having a hammock snuggle.

Posted by christopher at 1:30 PM 3 comments: 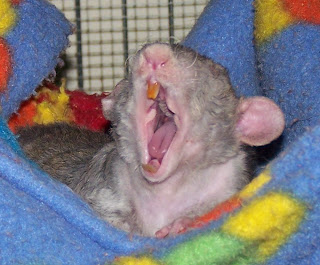 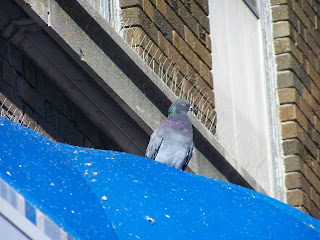 Caught this fellow keeping an eye on me...
Posted by christopher at 2:27 PM 1 comment: