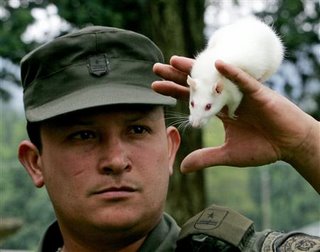 Runcho walks on the hand of a police animal trainer at a police school in Sibate, Colombia May 3, 2006. Colombian police are training white-furred, pink-eyed rats to locate landmines in Colombia. Police animal trainers, tired of seeing their explosive-sniffing dogs blown up by stepping on mines, hope the white-furred, pink-eyed creature will make it through upcoming open field tests and then into the Andean country's live mine fields before the end of the year. Picture taken May 3, 2006. REUTERS/Daniel Munoz.

Watch out Fido, your days on the force may be numbered. Police in Colombia are training Lola and Espejo, two whiskered, red-eyed rats, to sniff out bombs and land mines
Posted by christopher at 2:44 PM