Old Boober rat and Young Slugo rat are having a sniff and greet. So far the boys are getting along. 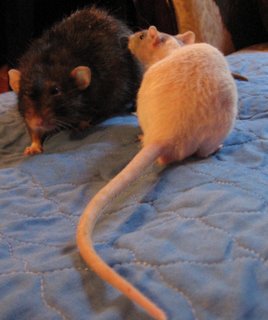 Boober at first seemed to not really care either way about Slugo but eventually offered some grooming which Slugo appeared to enjoy. Slugo would frequently slip underneath Boobers head in order to get more attention. 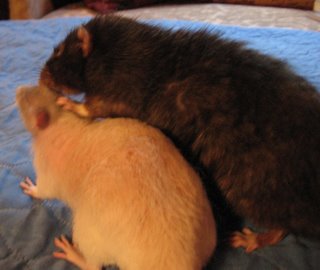 It's a good start. Slugo wants a buddy and Boober does not mind being the big brother. 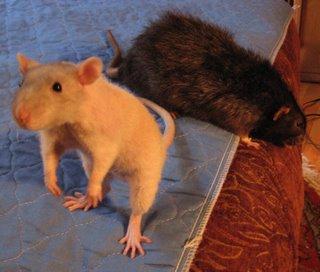 Posted by christopher at 8:20 PM

I hope your introductions continue with success! Sometimes intros can go so well and other times, well...lots of squealing and loss of fur.

On close examination I found a couple of small bites on Slugo... During lap time with Boober and Slugo they did get into a mild fur ball with Slugo running away squeaking.

Can I just say that you have picked the most awesome names for your baby ratties?