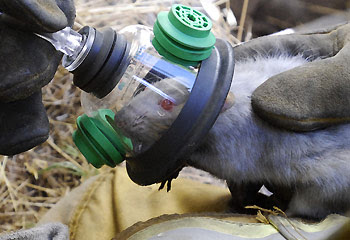 RATS may not be everyone's favourite animal, but firefighters thought highly enough of one to save it from a house fire in Pocatello, Idaho this week.

Firefighters trying to put out a huge fire at an apartment in the southeastern Idaho town were amazed to see a live rat huddled in a charred cage, the AHN website reported.

After being rescued, Halo the rat received oxygen with a special cone-shaped animal resuscitation mask.

Firefighter Kirby Jonas, who rescued Halo, said he was pretty sure anything in the cage could not have survived the flames.

"If I were betting money, I would have put down $10,000 that anything in that cage was dead," Mr Jonas told the Idaho State Journal.

Halo was not the only lucky one rescued from blaze. Firefighters also rescued four of five cats in the apartment.

No one was home at the time of the fire, which officials blamed on an electrical fault.
Posted by Trishymouse at 10:01 PM