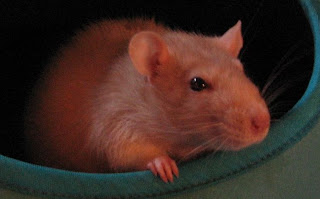 Over the last week Regina rat had been slipping away. Regina rat had not been showing any obvious signs of discomfort or pain but she has been slowing down considerably and her body temperature was cooler than normal. I would find Regina laying all by herself, looking forlorn and panting softly with no obvious congestive lung sounds. Her tumor-like growth had not appeared to have gotten any larger. Regina rat would willing let me hand-feed her and give her Pedialite and then cuddle with me for naps. She was getting around the various levels of the cage with some effort but she was very willful on going where she wanted to go, at times leaping up ramps or across levels and still getting food and water on her own. She would even get "twitchy" while being held when she needed to go to the bathroom. But every day she would slow down more and more. We would take time to cuddle and nap together and she was still very bright eyed and bruxing.

This morning Regina rat drank some Pedialite and nibbled some treats but I could hear her softly whining. When I put her back she would turn and climb back up my arm, letting me know she needed more snuggle time. Regina rat did sleep on her own in her hammock for a while, her two new sisters checking in on her with cuddles and licking, but as I was about to leave I looked in on her and could see she was in distress. I took her out, wrapping her in her blanket and she sat with me. After a while she tried to get up on her own, letting me know she had enough of my snuggles and I put her on the play mat near her playhouse. Regina rat sat on her mat and I scritched and cuddled her and seemed to be happy with her last moment on the play mat. She begin to twitch, gave out a soft cry and a gasp, trembled and was gone. I sat with her for a while longer and then readied her for the journey to the rainbow bridge.
Posted by christopher at 11:40 AM

Farewell, Regina - You were well loved. Tell Beatrice and Eva hello. We miss you all...

I am so sorry for your loss...How wonderful though that her last moments were spent with the ones she loved. Tell Coal, radish and Dime hello for me Regina, and have a blast with your new wings.

I'm so very sorry for your loss -x-

Oh! We are so sorry that Regina had to leave you... She was a great rat.

I'm so sorry for your loss...goodbye Regina.