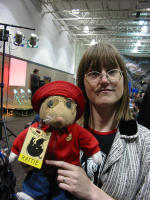 Today was another long day for Rattie.

We arrived at Valleycon shortly after 10:00am to stand in line and register. As you can see here, Rattie is cunningly in costumer as a 'nerd' with his glasses! 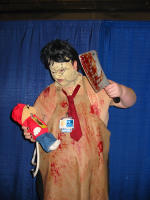 We toured the sellers room to see what there was for sale - things you don't need, but must have! Along the say, we encountered many people in costume. Some were fun ones, but others were pretty scarey. Here, Rattie has a close call with Leatherneck! 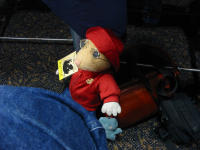 Here, Rattie is getting a little bored. We're waiting for see Kevin Sorbo! Kevin is originally from Minnesota, and attended college in our metro area. I'm a big fan of his, and he was fun to listen to as he answered questions and gave insider insights to his experiences. 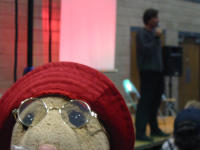 Later on we left to check out the film festival at the Fargo Theatre, part of Valleycon. We had fun watching a new low-budget independent (but well done) film of Robert Louis Stevenson's The Strange Case of Dr. Jekyll & Mr. Hyde. It was produced, written, directed, and starred Mark Redfield, from Redfield Arts Studio.

We finally headed wearily home around 6pm, a full day of silliness and fun behind us. Tomorrow Rattie will rest up, before his trip home on Monday...
Posted by Trishymouse at 8:53 PM