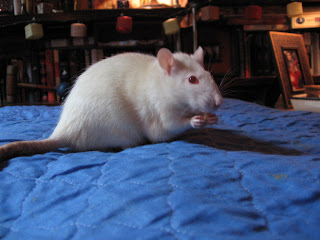 Amelia rat was a strong and persistent little old lady rat from the day she arrived to the evening she left us. As she sat in my arms she struggled, fighting to her lost moment with such dignity and grace, her soft, loving pink eyes looking up at me while I snuggled and scratched her.

I found Amelia rat's tumor shortly before her nieces were born and fretted about what should be done, considering her age and temperament. Amelia was fragile but persistent when she wanted something, pushing her way out in front of the younger ratty girls and letting her intentions be known. Nothing could stop her from her navigating the house and play area. We would sit together in evenings, Amelia bruxing and boggling in my lap or against my forearm. Eventually she would start to fuss, her way of telling me she had enough and wanted to go back to her house. Amelia's nieces Drinky and Gabby and sister Isis took care of her. Gabby rat insistented to being her snuggle buddy while her newly adopted sister Elle rat would share the plush new hammock with her. Amelia rat could diffently hold her own.
Posted by christopher at 8:20 PM

farewell lady Amelia rat, hope you are loving your new wings. You are in out thoughts and prayers.

We are thinking of you in your time of loss...

oh we are sorry to hear about Amelia leaving for the Bridge. She sounds so feisty and cute. Sending *foofs* to keep you feeling not alone in yer sorrows ~The FLuffy Tribe

It's been a bad year. My condolences. She was a wonderful girl.

I'm so sorry, she was such a pretty girly :(