not so wee little beastie 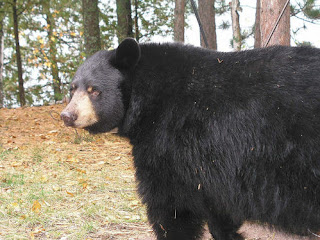 The Minnesota Department of Natural Resources says that Solo, a one-eared black bear hibernating with her two cubs underneath a private cabin, has become too familiar with humans in Eagles Nest Township. [Associated Press]

DULUTH, Minn. – Some residents of a northeastern Minnesota township just can’t bear the thought that the Department of Natural Resources would give Solo a permanent hibernation.
The DNR says that Solo, a one-eared black bear blissfully hibernating with her two cubs underneath a private cabin, has become too familiar with humans in Eagles Nest Township. But many of those humans have put out food for Solo and like having her and other bears around.
An estimated 25 bears live in the township, but many residents recognize Solo because she only has one ear. The other was ripped off when an adult bear attacked her as a cub, Humay said.
“Personally, I think it’s premature to kill the bear,” said Township Board Chairman Dan Humay. “A number of people are convinced this is not an aggressive animal. It hasn’t done anything to merit destruction.”
One of those people is Lynn Rogers, a longtime bear researcher who has a radio collar on Solo and has been studying her habits to find out if people’s “diversionary feeding” of bears makes them less likely to break into homes or cause other damage.
The Minnesota Department of Natural Resources says that Solo, a one-eared black bear hibernating with her two cubs underneath a private cabin, has become too familiar with humans in Eagles Nest Township. Associated Press But the DNR told Rogers in a Dec. 5 letter that some of the reported problems with Solo last summer, in which she got close enough to some residents to sniff or nudge them, “may be a direct result of your activities, which have habituated the bear to human presence.”
In November, the owner of the cabin learned that Solo and her cubs were hibernating under the unoccupied cabin – and that Rogers, founder of Ely’s North American Bear Center, wanted permission to put a video camera there and broadcast images on a Web site.
Instead, the cabin owner asked the DNR to remove the bears. That, along with the earlier complaints, prompted the DNR’s plan to euthanize Solo and relocate her cubs, said Mike DonCarlos, the agency’s wildlife research and policy manager.
The cubs are young enough to learn new habits, DonCarlos said, but Solo’s behavior probably can’t be changed.
“The bear is willingly approaching people without fear,” DonCarlos said. “That’s not normal behavior, and that is sufficient cause for a public safety concern. We have to err on the side of caution.”
Minnesota’s wild bear population is thriving, numbering in the thousands, he said, and the DNR usually kills a few dozen a year in the name of public safety. He admitted Solo’s situation is unusual because the problem bear is currently hibernating.
DonCarlos said the plan remains in place despite complaints, although “there’s no timeline, and it’s not likely (to be carried out) this week.”
That hasn’t stopped a 14-member “Community Bear Committee” from devising a 17-page plan called “Living with Bears ... Coexisting with Wildlife in a Natural Setting.” It concluded that, while habitually aggressive or destructive bears may need to be killed, that research or nuisance bears might simply be deterred through coordinated efforts like electric fences around gardens, storing barbecue grills and bird food inside, and driving problem bears away with loud noises or pepper spray.
“Killing the bear might be the expedient thing to do,” Humay said, “but we’re eager to see if we can be effective in finding a different solution.”
Posted by christopher at 12:53 AM