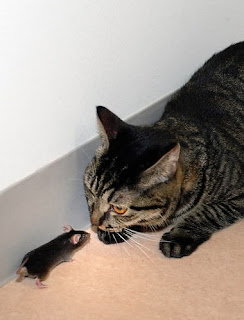 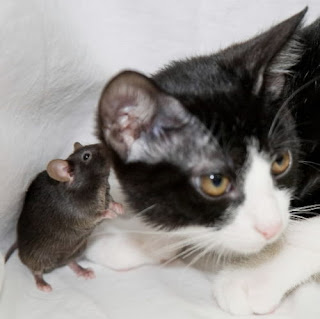 TOKYO – The age-old animosity between cats and mice could be a thing of the past with genetically modified mice that Japanese scientists say show no fear and shed new light on mammal behavior.
Scientists at Tokyo University say they have used genetic engineering to successfully switch off a mouse’s instinct to cower at the smell or presence of cats – showing that fear is genetically hardwired and not learned through experience, as commonly believed.
“Mice are naturally terrified of cats, and usually panic or flee at the smell of one. But mice with certain nasal cells removed through genetic engineering didn’t display any fear,” said research team leader Ko Kobayakawa.
“The mice approached the cat, even snuggled up to it and played with it,” Kobayakawa said. “The discovery that fear is genetically determined and not learned after birth is very interesting, and goes against what was previously thought.”
The findings suggest that human aversion to dangerous smells, such as that of rotten food, for example, could also be genetically predetermined, he said.
Posted by christopher at 12:22 AM

Hi Chris I buying a Rat for xmas, I used to keep them years ago and I thought I would give them another try