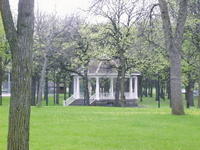 Again, I woke up hearing the sound of distant rolling thunder.

After a period of illness caused by what could have been a stroke or inner ear infection it appeared Little Brown Mouse was making a come back. She was becoming her old manic, frisky self. She was even making rounds of the cages, looking for her old sleeping nests and pestering the other mice.

I found her this morning. She looked as if she had passed in her sleep. Her little body was beginning to stiffen and I could see that she had been in a sleeping-crouch pose when she died. Momma Mouse Pudding, the mother of Little Brown Mouse and the oldest of all the mice, was fussing around her, almost looking is if she had been attending to her on Little Brown Mouse's last moments.

I took Little Brown Mouse to the place where her father Mabel, sister Lena and Auntie Belle were buried. As I placed the last bit of earth on top of her final nest a soft rain began to fall.
Posted by christopher at 9:34 AM

Goodbye Little Brown Mouse. We are glad you had your Mom to see you off to the Rainbow Bridge. ~Pip, Salsa, Fig, Jorje, Aoewen, Narnia, Josie, Arthur Dent, Ford Prefect