My niece, Britton, shared this with the family today...

As each person ages, I think one of the most exciting times in an individual's life is receiving that first paycheck. If you can think back to your first job, can you think back to your very first paycheck? If so, do you remember what you did with your first paycheck? Do you have anything to show for it? I was fifteen and from my first job, with my very first paycheck, I bought myself a beautiful miniature Dachshund. With a spring in her step, the only name that would suit her bubbly personality would be Cricket. June 1st, 1993-April 26th, 2008 (just shy of 15 years old & 105 in dog years).

I have many favorite photos of Cricket because she loved the camera. It was as if she would literally pose for the camera, knowing all eyes were on her. Included are two photos, one of her younger years (taken with me) and one in her later years. Although she appears white in her later year's photo, she actually spent most of her years white. Why you may ask? To remind my father to never leave her outside in a blizzard ever again. And guess what, he never did.

This is my favorite poem by an unknown author dedicated to man’s best friend...

God summoned a beast from the field and he said...

"I endow you with the instincts uncommon to other beasts:
Faithfulness, devotion and understanding surpassing those of man himself.
Lest it impair your understanding, you are denied the power of words;
Speak to your master only with your mind and through honest eyes.

So be silent, and be a friend to man;
This shall be your destiny and your immorality."

So spoke the Lord.
And the dog heard and was content. 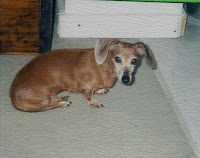 You lay in my lap with your amber eyes looking up at me.
We both knew this day would come.
As I run my hands through your coat, you let out a low sigh.

I tell you I love you and you whine a low whine.
We knew it would come and we wouldn't know the time.
Forever is an illusion we create to avoid the pain.
It's a lie we tell ourselves to keep ourselves sane.

what a sweet little girl. We hope your heart heals and your girl runs to the Bridge and enjoys playing with all our babies who are there already ~The Fluffy TRibe and Jane