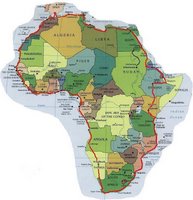 Riaan Manser became the first person to circumnavigate the continent of Africa by bicycle in November 2005. He met many fascinating individuals along the way, as you might imagine, including...Russell:

I had a friend join me for about 8 hours on Sunday while aiming for the Libyan border from Tunis . Although I sort-of kidnapped him , it certainly was not the situation from the outset. His name was Russell and he is a Tunisian field mouse.

Russell was huddled in a little ball , shivering uncontrollably in the pouring rain and chilling wind . He was also perilously close to passing traffic and probably in the back of his little mind he understands what I did for him. Nonetheless he enjoyed the warmth inside my jacket pocket and the full stomach that came from sharing my food. He seemed to enjoy the greasy rag I had used as a towel to dry him with initially and then subsequently as his bed. Approximately 30km after I had ‘saved’ him the two of us stopped at a garage for a snack . We ate outside in the parking area as I didn’t think the other customers would enjoy sharing the eating area with a rodent. This is where Russell made his first getaway. He jumped from my lap with an impressive leap. This had me running after him in a bent over position , cycling shoes clicking away like a tap dancer with me every now and then lunging unsuccessfully to scoop him from the ground. This minute or two event drew a group of onlookers most political rallies would be proud of . I put this embarrassment I had suffered down as the mandatory relationship building phase . Although very one sided currently , I remained committed (desperate) to make a new friend. We continued in the rain , me still getting soaked and Russell now cosy in his new apartment I had provided. Russell and I then stopped 25 km later for a drink of water . While I was having my drink Russell sat in my free hand wrapped in his cloth. Suddenly he decided again that he had had enough of my generosity and made a concerted effort to ‘escape’. This time , on his first leap, I managed to catch him mid-air and hold him more firmly than before. Russell then, without much hesitation , bit me and leaped clear of my reach. He first ran parallel to the traffic and then turned right into the grass area. Once again, I decided that the bite was part of the complexities in building a relationship. I followed him into the muddy grass area . Here I did the same ‘catch me if you can ‘ dance as before . Just the tapping sound was replaced by squelch of the mud under my tired shoes. Russell eventually got his freedom. But I am worried about him. He doesn’t even know anybody in that area . It could turn out to be a very lonely move on his part. Good luck Russell.

Posted by Trishymouse at 8:58 PM

I can't say I have always been a rodent fan. But I happened upon your blog and I just wanted to tell you I think it's really sweet, and very interesting.