Where I have been...

If you have wondered what happened to all the wee little beasties, let me tell you...

My life has radically changed in the last year. Without going into many unpleasant details, the end results have been positive. I found a life partner after 50 years of searching. I resigned my government job of 23 years. I moved from the city to the country. I live a much more humble and quite different life. I have much less money now and have to watch my pennies. But I am happy in a much deeper sense. I feel challenged in a very good way.

You see, I grew up in the country. But I left it many years ago. I often day-dreamed of going back but had no idea how I could accomplish it. I have found, in the end, that you can do whatever you want, if you truly want to.

But what of the animals, you ask? The ratties were found good homes through petfinder. My cats, they followed me to the country. Simon has passed away, alas, but Tigger is still with me, and has joined my partner's cat, Whiskers. Both of them were city cats, and now have become country cats, and quite accomplished mousers! I will probably not post here very often, since my focus nowadays is on the farm, my passion for local history, etc. But I may pop in here now and then.

You are welcome to check out my other sites, especially Prairie Woman, which will have many stories about our animals...
Posted by Trishymouse at 8:52 AM No comments:

Where did the ceiling go?

Where did the ceiling go?
Originally uploaded by queenbeeamy
A Flickr friend's rattie takes a stroll in the yard, enjoying the wonderful summer weather...
Posted by Trishymouse at 11:57 AM 3 comments: 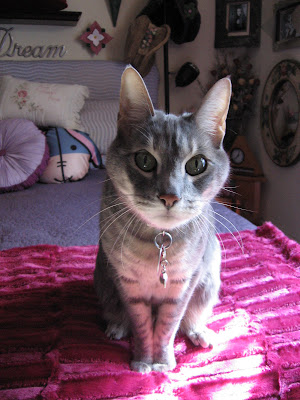 Posted by Trishymouse at 2:00 AM 4 comments: 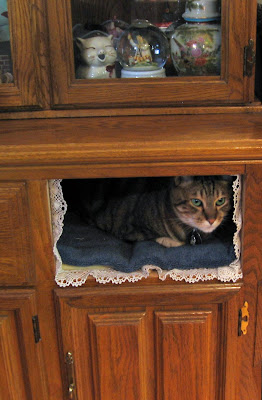 We call him “Cat,” We call him “Crazy” yet is he neither. – George Herriman on the title character of Krazy Kat

There is no comic strip simpler, on the face of it, than Krazy Kat. In its 31-year run (from 1913 to 1944) the plot never changed much. Ignatz Mouse, sadist supreme, aims to bean the beribboned Krazy Kat, soulful innocent, with a brick, and usually succeeds. Krazy Kat takes the brick, even seeks it out, as a missile of love. And Krazy’s secret admirer, the police dog Offissa Bull Pupp, throws the errant mouse in jail. All’s well. Yet despite the repetition, Krazy Kat is endlessly perplexing, energetic, deep and playful.

In Krazy Kat, George Herriman made everything indeterminate. He set the strip among the rocky outcroppings of Monument Valley, opening up the funnies to vast, abstract spaces. (Yes, he beat John Ford there.) He made the trees, rocks and moons shift shape from frame to frame for no apparent reason. His free-floating page design, with its mad array of wheels, zigzags and frames within frames, kept changing.

And then there’s that Krazy language. The Kat speaks a dialect that is distinctive, yet elastic, and impossible to pinpoint. Yiddish? “Ooy-y-y- Sotch a noive.” Creole? “S’funna, but I dun’t see no stomm – the sky is klee – blue an’ bride wit’ sunshine – not a cloud in it.” Brooklyn-Italian? “Jess fency, Offissa Pupp, the tree of us, riding around tigedda – like boom kimpenions.” At one point, Krazy asks Ignatz: “Why is lenguage?” and then answers the question: “Lenguage is that we may mis-unda-stend each udda.”

advertisementIn 1946, cummings saw Krazy Kat as a “meteoric burlesk melodrama of democracy… a struggle between society (Offissa Pupp) and the individual (Ignatz Mouse) over an ideal (our heroine)”. In 1959, Kerouac found in Herriman’s strips some of the roots of the Beat Generation: “It goes back to the inky ditties of old cartoons (Krazy Kat with the irrational brick).” In 1963, Umberto Eco called Herriman a Scheherazade who creates “a genuine state of poetry, an uninterrupted elegy based on sorrowing innocence”.

In 1971, however, the Krazy world changed. While researching an article on Herriman for the Dictionary of American Biography, the sociologist Arthur Asa Berger got a copy of Herriman’s birth certificate. Although Herriman died Caucasian, in Los Angeles in 1944, the very same George Herriman, the son of two mulatto parents, was born “colored” in New Orleans in 1880.

If Herriman knew he was black, he certainly did not flaunt it. That’s no surprise. In 1880 Herriman would have been considered a “free person of color”. But by the turn of the century, when he was a fledgling cartoonist, the newspaper bullpens “were open to immigrants but not to blacks”.

How did he respond? Oddly. He made cartoons that seem a little racist themselves. In 1902, Herriman drew a cartoon called Musical Mose, in which a black man repeatedly tries and fails to “impussanate” a white man. In one instalment, Mose masquerades as a Scotsman. Some white women discover he’s black and beat him up. Mose moans, “I wish mah color would fade.” His wife is unsympathetic: “Why didn’t yo impussanate a cannibal?” she asks.

Herriman went on to create other comic strip heroes: Professor Otto and His Auto, Acrobatic Archie, Major Ozone’s Fresh Air Crusade, Rosy Posie- Mama’s Girl, Baron Mooch, and The Dingbat Family (later renamed The Family Upstairs), a strip about a family obsessed with the people living on the floor above. In 1910, at the bottom of one Dingbat Family strip, he drew in a cat and mouse, just “to fill up the waste space” below the main strip. Krazy and Ignatz were born. On July 26, Herriman had the mouse bean the cat for the first time. After a month or so, Krazy Kat fell in love with her tormentor. She kissed Ignatz as he slept. “SMACK!”

So, what do we know about Krazy? Krazy looks kind of feminine, but there are signs that she’s not. Ignatz sometimes calls Krazy “he”. Krazy claims to be confused: “I don’t know whether to take unto myself a wife or a husband.” At another point, Ignatz’s wife and kids can’t figure out whether to call Krazy “Uncle” or “Aunt”. They try out both. Krazy doesn’t answer to “Uncle”, but at “Aunt Krazy” turns his head: “Kollin me, dollins?”

Sex is to Krazy as race is to Herriman: indecipherable, dangerous, interesting. As Herriman himself put it: “Krazy was something like a sprite, an elf. They have no sex. So that Kat can’t be a he or a she. The Kat’s a spirit – a pixie – free to butt into anything.”

What about Krazy’s race, then? She is definitely black, with a few – or not so few – crucial exceptions, as when Krazy gets doused in white paint or in white flour, or switches skin with Ignatz, who, in turn, becomes “a l’il eetiopium mice, bleck like a month from midnights”.

Herriman once placed Krazy in the same scenario as Musical Mose. Krazy goes to a beauty salon and when she emerges, all white, Ignatz falls in love with her, not realising who she is. She coyly drops her handkerchief, with the initials “KK” on it (just one K short of the Klan), and Ignatz looks surprised. Krazy turns and explains: “My initchils – mins Krazy Ket – y’know that dunt you dollin?” Ignatz runs for a brick and Krazy wanders off, saying: “L’il tutsi-wutsi thinks because I change my kimplection Ishould change my name.”

Herriman is even bolder when it comes to class. In one strip, some of Coconino’s citizens, Walter Cephus Austridge, Terry Turtle, Gooseberry Sprig, Ignatz Mouse and Kolin Kelly are all smoking “at the Klub” and boasting about their royal roots. And who should come waltzing by but Krazy Kat, singing like an old-time minstrel about “the old ‘haunted-house’ and the cellar unda-neet it, and the dear old ‘wash-boila’ ee-e-een which I was ‘born’”? The other animals are appalled: “Oh, that us aristocrats has gotta breathe the same air as a ‘wash-boiler’-bred boor – s’awful.”

We get the real score from Joe Stork, the “purveyor of progeny to prince and proletarian”. It turns out, according to Joe, that all the animals are lowborn. The only thing that distinguishes Krazy is that she hasn’t any shame. She sings out her story in her bastard dialect. She was born in a cellar. So what?

Yet Herriman did care – about colour, class, race, and all matters high and low. This comes through in the strip’s very architecture. Remember that Krazy and Ignatz didn’t arrive full-blown on the page. They appeared in a basement strip under the Dingbats, who in turn lived under the family upstairs.

Herriman was obsessed with up and down. For him, almost every torment – tossed bricks, loud neighbours, beatings from racists, the delivery of babies by Joe Stork – comes from above. Ignatz is almost always higher on the page than Krazy. But down below is where the soul of the strip is.

That’s where Krazy was born, where she abides, and where she is the unconscious foe of everything that rises. Towards the end of Herriman’s life, and strip, a strange thing happened. The little sliver of basement space that had been the birthplace of Krazy and Ignatz opened up again. Herriman created a new underworld and filled it with enigmatic codas commenting on the strip above, much as he had when Krazy and Ignatz were infants under the floorboards. Sometimes those slim bottom strips include a periscope that never quite manages to peer into the world above.

Herriman’s last Sunday page, exactly two months after his death, shows Offissa Pupp watching bubbles emerge from a pool. He thinks Krazy is drowning and dives in to save her. The underpanel shows Krazy safe, floating on her back in the underworld and holding up a sail as ripples spread from her in the calm water. She is under her own power, but going nowhere, idling in the “waste space”, as Herriman called it, the breeding ground of endless subversion, waiting for the next breeze.

This is an edited version of an article that appeared in ‘The New York Review of Books’. The complete Krazy Kat is being republished by Fantagraphics in several volumes as ‘Krazy and Ignatz’.
Posted by Trishymouse at 2:00 AM No comments: 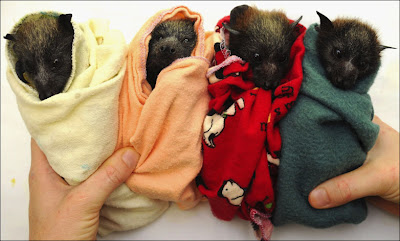 Four baby flying foxes who were separated from their mothers during fierce storms on Australia's Gold Coast are being cared for by volunteers at a wildlife centre.

The Squirrel Next Door

Posted by Trishymouse at 10:29 PM No comments:

Cats on the go 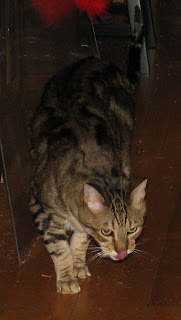 Simon on the stalk. 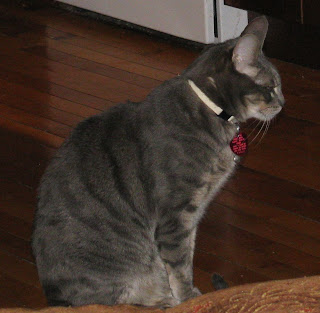 Tigger is not amused.

Posted by christopher at 6:26 PM No comments: